You are here: Home / Flight / Flysky iA6 RX – telemetry and failsafe with OpenTX

I ordered an iA6 receiver for a flying wing I picked up at the local R/C swap meet. It took 30 days to get here from China. 😒 How have I not learned not to order stuff during the Chinese New Year? Once I got it, there were a few tricks and troubles I went through, so here’s the rundown.

I specifically purchased the Turnigy iA6 (same as FS-iA6) instead of the iA6B for a few reasons. It has leads coming off of the top instead of the end, so it’s effectively shorter when servo connectors are plugged in. Perfect for the Techone Mini-Popwing which has a small receiver cut-out. It also has a rudimentary telemetry system built in, and the first version (non-B) can be hacked very easily to provide battery voltage telemetry to the transmitter.

The telemetry hack is well covered in the RCGroups link above, so I won’t go into it, but will outline a couple other issues I encountered.

I had a couple issues binding it b/c the iA6 came with no instructions. So here’s what I did to finally get it bound to my transmitter. 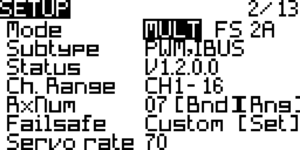 Step 5 was the part I was missing. I would unplug the receiver power before removing the bind plug (the way many other receivers work). This one goes against the grain.

Because of the way I hacked the channel 1 pins for battery voltage instead of supplied BEC voltage I decided to move the ESC to a different channel instead of doing some crazy wiring. This is fine and easy to do, especially in OpenTX. However it has implications for failsafe and I stress the safe part for safety.

I moved the throttle channel to the next available – Ch. 4 which is normally rudder and not needed for a wing. But without any failsafe settings the receiver may go to “center stick.” This means if you lost signal, the motor would stay at 50% throttle instead of dropping to zero. Good luck finding your aircraft when it’s in another county or it has rocketed into the ground. Decidedly not safe 😲

You have to be running Multiprotocol version 1.2.0 or higher and OpenTX 2.2.1 or higher to adjust the failsafe settings.

I don’t think failsafe settings in general are actually saved on the receiver (unless a receiver specifically supports this). It’s more like temporary instructions. Once connected to the transmitter, OpenTX says “Hey if we get disconnected, do this…”

The good news is when the iA6 receiver powers up and cannot find the transmitter, it defaults to no pulses on all channels. The bad news is if you don’t set failsafe settings, everything but channel 1 is going to center stick.

In OpenTX you can simply set the failsafe to no pulses. I took it a step further, used the custom settings and set all sticks to center except channel 4. 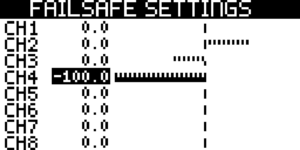 Follow these instructions on how to set custom failsafe settings of your own!