You are here: Home / Flight / Fixed Wing / HK-T6A as a Trainer Buddy Box

I got super-cheap HK-T6A V2 6-channel radio for my first model airplane. It’s great because it’s programmable using a computer and a specialized USB cable. Using the USB cable, you can also play simulators such as FMS and RC Desk Pilot (among others). Did I also mention it’s dirt cheap?!?

After I built another plane and also purchased a small multi-rotor, I quickly realized the need for a transmitter that could handle multiple models. The Turnigy 9x fit the bill. I kept my old HK-T6A for using on the simulator and now my son will use it to fly his FT Flyer.

The 9x has a trainer switch and a trainer port, so I wondered if I could buddy-box these two radios. There’s plenty of information out there regarding modifications to buddy box two HK-T6As, but using the 9x as the master and the T6A as the slave seems like it would only require a specialized cable with no modification to either radio.

The Turnigy 9x trainer port is a 1/8″/3.5mm mono mini-jack wired for PPM signal on the tip, and ground on the shaft. I just needed to sort out the same pinouts on the HK-T6A. 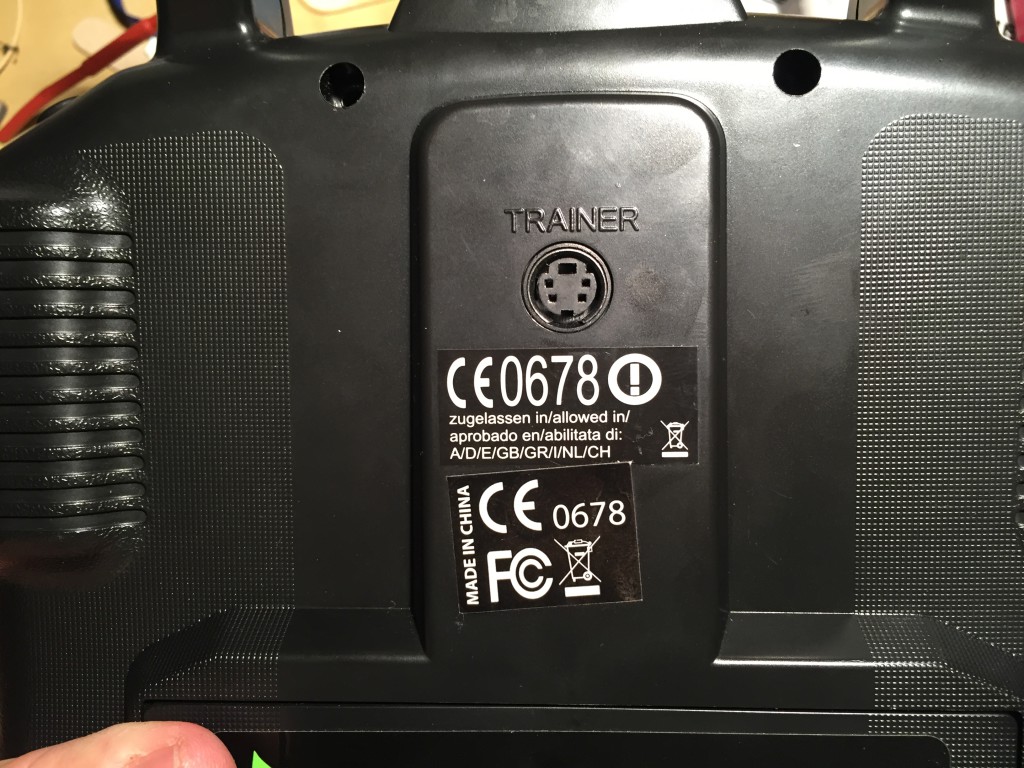 Without a nearby Radio Shack, I got the materials needed from Ax-Man Surplus: an S-Video (4-pin Mini-DIN) cable and a mono mini-jack cable.

There is some confusion out there as to the pin-outs on the trainer port of the HK-T6A. Since it uses a Mini-DIN connector, some information out there references pin-1, others pin-2. The key to remember is that the pin-out numbers on diagrams typically reference the female socket, not the male cable. So the pins on the male cable (which we’ll be constructing) are a mirror image layout to the female socket.

Also, the T6A uses the outer metal skirt for ground. Standard S-Video cables don’t use the skirt for any signals, it’s just used to protect the pins and notched to make sure you don’t try to plug it in incorrectly. I used a dremel to remove some plastic on the connector to expose the skirt while plugged in, so I could solder a ground wire to it. 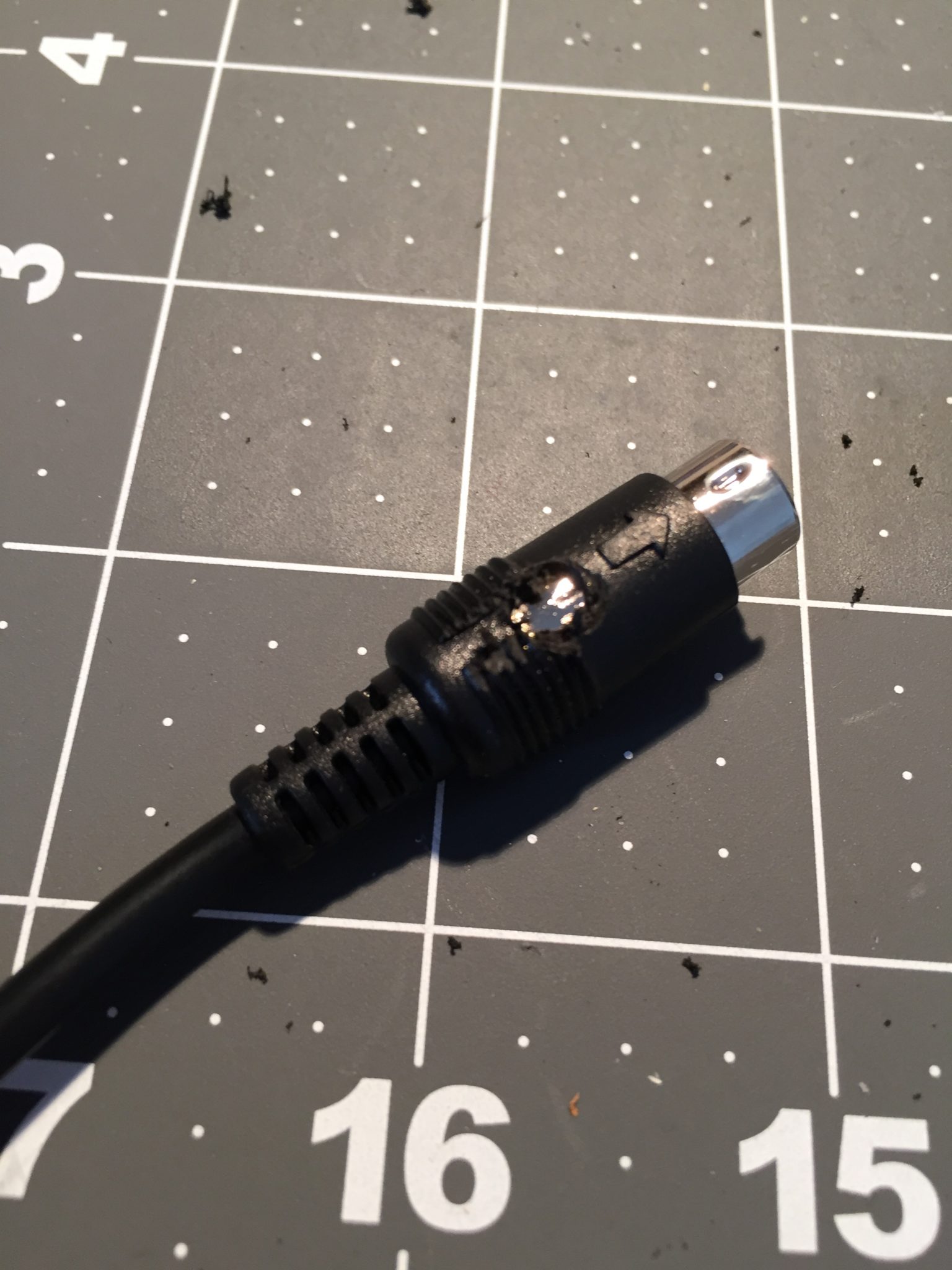 The best way to clear up any confusion I’ve found is photographs. I opened my HK-T6A up and took some photos so you don’t have to! Despite the contradictory pinout information I found, it is unanimous that the PPM signal on the HK-T6A comes from the orange wire: 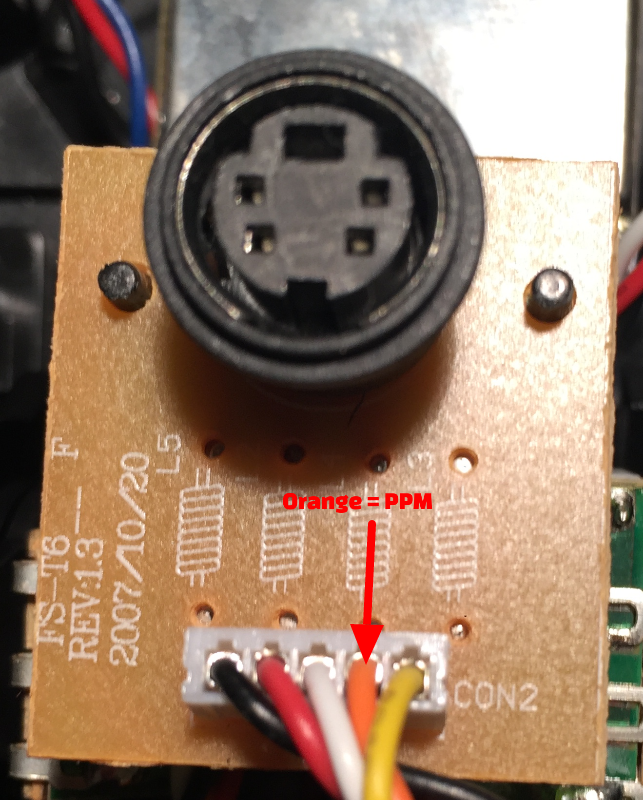 If you turn that cute little circuit board around you can follow which pin the orange wire goes to: 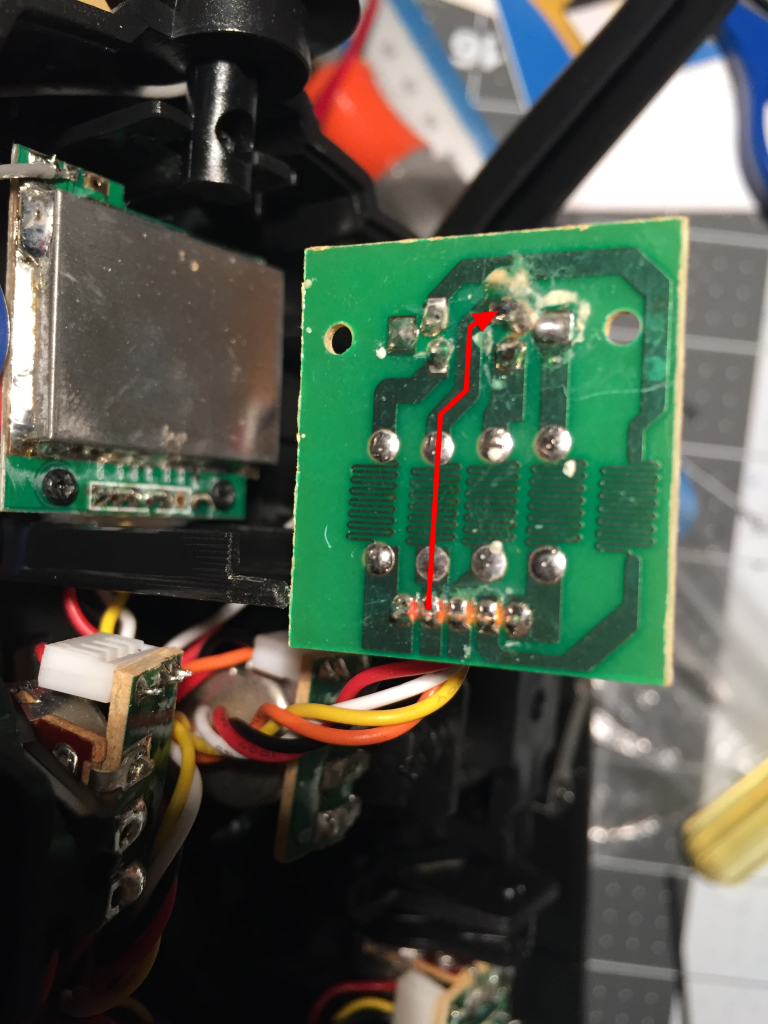 Upper right on the back of the circuit board means upper left on the other side – when you look at the socket normally on the back of the radio. Since the socket is also mounted upside down, this corresponds to pin 1. Glad we got that solved. Just make sure you use the mirror image to find that pin on the cable. Holding the cable upside down (to match the upside-down socket), pin 1 is in the upper right. 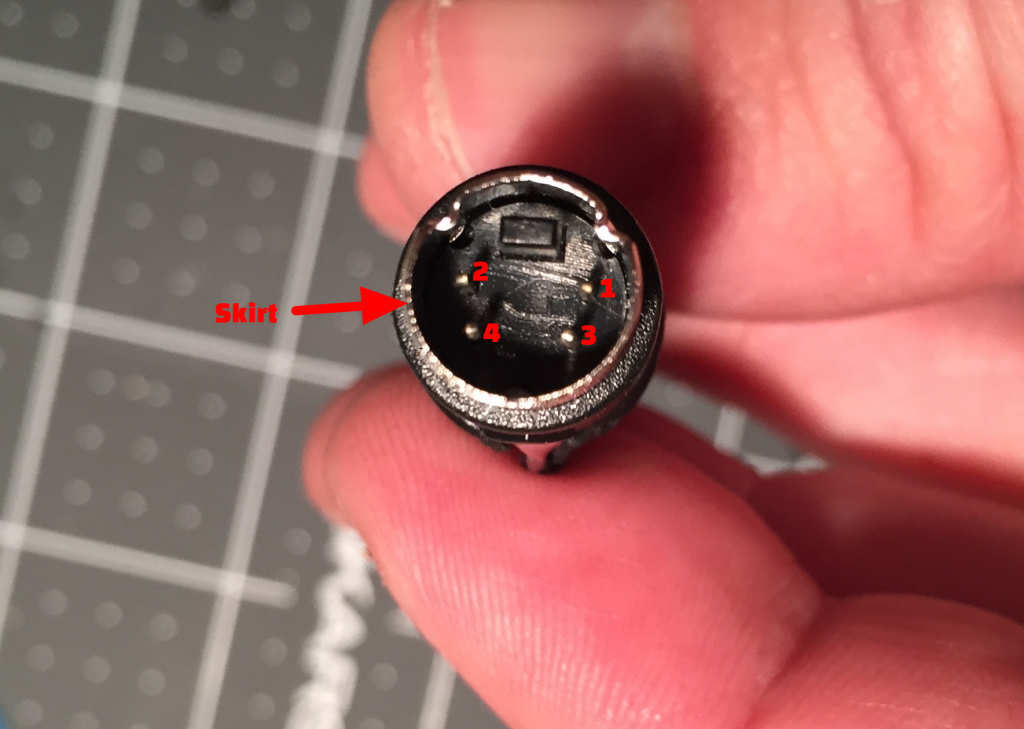 Surprisingly when I cut the S-Video cable and stripped back the sheathing, there was only two wires. Then after I stripped one of the wires I discovered each one is a coaxial cable for a total of 4 pins. 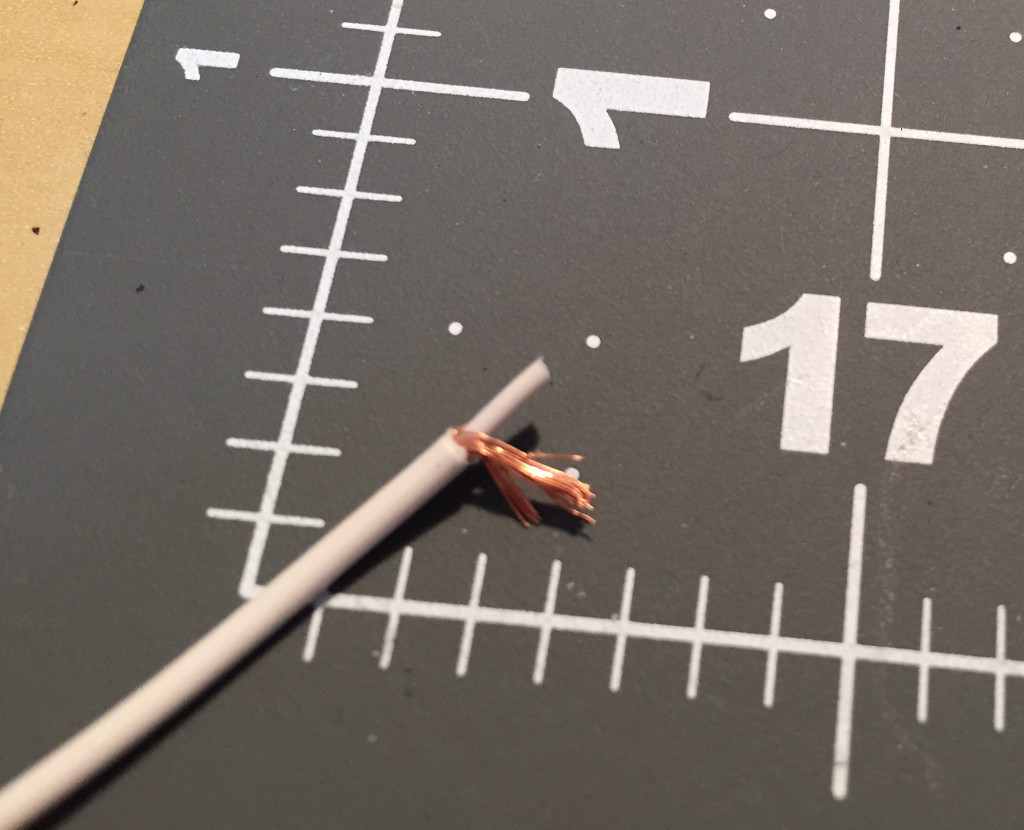 On my particular S-Video cable, the outer shield of the red wire corresponded to pin 1.

To wrap it all up, I added heat-shrink to the spliced area, and then wound my wire around a screwdriver to give it a (somewhat temporary) coil effect: 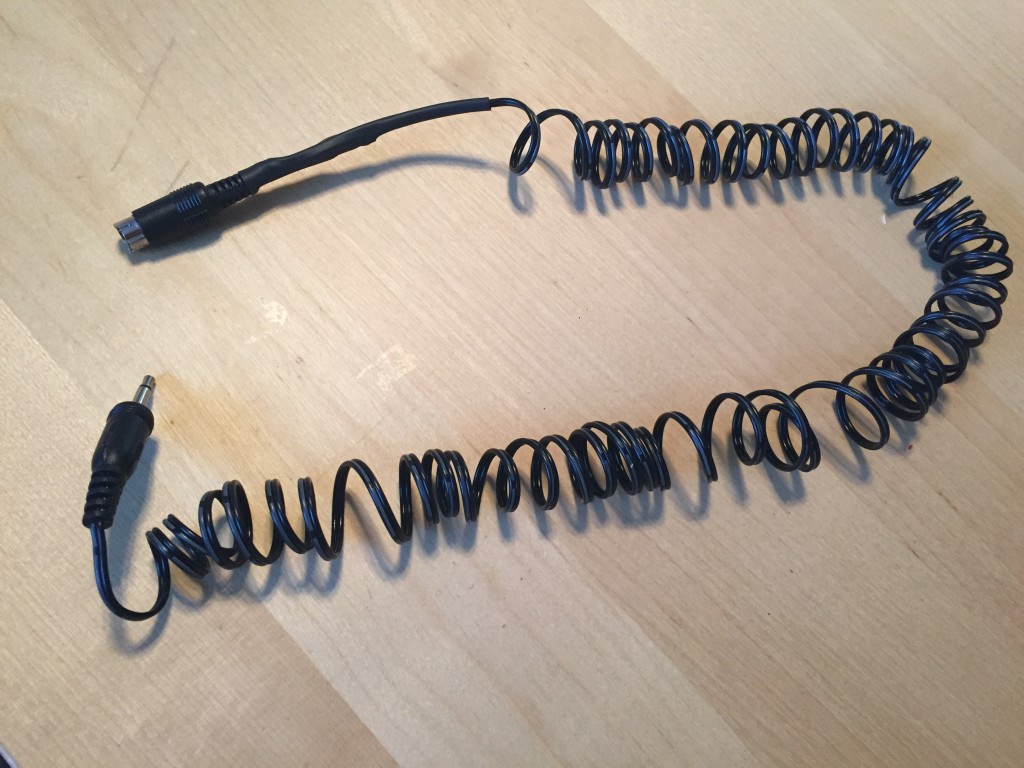 There are some caveats to consider while using this setup. The HK-T6A needs to be powered on to communicate in this setup. In most buddy box configurations the slave is turned off – not the case here. Any programmed settings in the HK-T6A including throttle cut, dual rates, and servo reversing are transmitted to the master. Don’t be that guy (like me) who shows up at the flying field and realizes all the settings are good except elevator is backwards on the HK-T6A – and you need a computer and special USB cable to reverse it, which you may not have brought. Make sure you do a high-five test on both the master and the slave before you head to the flying field:

The transmitter in the HK-T6A is not defeated when being used with a sim or as a buddy box trainer, so just make sure the model you’ve bound to this radio is not on, or you’ll be flying that as well.

If you run OpenTX (like I do) and need some tips on setting up the trainer functions on the master radio, check out this video: