To ceremoniously guide, conduct or usher.

In R/C club racing, similar to 1:1 scale club racing, the drivers must also help as a corner marshal after they race. This means helping out cars that get stuck, crash, or flip so they can continue their race. It’s a dance as you help crashed cars while other cars are still racing on the track. I’ve picked up a couple of tricks here and that help me – and maybe they can help you be more adept at marshalling. And since every driver is also a track marshal – there’s a section for drivers too. You should read both. 😎

END_OF_DOCUMENT_TOKEN_TO_BE_REPLACED

After having some troubles playing VRC, I started to look at my hardware to see if there was some gains to be had there because while I’m not a great racer in real life, I’m also not terrible 😎 I wound up doing a lot of research regarding the relative speed and latency of various tx/rx brands and models. The most concrete measurement I could come up with is the PWM frequency sent from the receiver to the ESC & servo(s). PWM signals are often much faster than PPM signals that are used by buddy-box or direct servo control systems. This is important in regards to playing VRC.

I gathered results measured by myself and others using the SkyRC Program Box. It is not a foolproof measurement of end-to-end latency – the delay from when you give a controller input and the ESC reacts to it. But it’s a clear metric, and part of the overall latency we can measure easily.

Much of this may not even matter to you. The average human reaction time is on the order of hundreds of milliseconds. For transmitter latency we’re talking about tens of milliseconds or less. Also, the transit time on the fastest servos are around 50 milliseconds, so that is another part of the equation that is difficult to reduce. But just because the measured latency is less than what we as humans can react to, it doesn’t mean these delays can’t be perceived, even if it’s just in the way something feels.

END_OF_DOCUMENT_TOKEN_TO_BE_REPLACED

I can’t always get to the track to actually race, so the next best thing is playing Virtual RC Pro. I can practice or race at anytime, no matter what my family’s schedule is or what the weather is like. I initially had some trouble playing VRC, so I put this together to document how I was able to improve gameplay, and my driving. The first part of this is about getting VRC set up and working well. The second part is about racing electric on-road cars in VRC (that’s what I drive at our local tracks). But there may be a buggy in my future so subscribe to get those updates as well!

END_OF_DOCUMENT_TOKEN_TO_BE_REPLACED 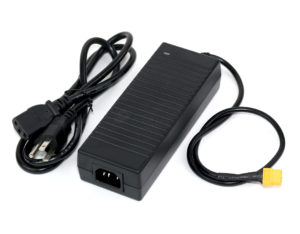 This little power supply from Ready Made RC is a tremendous bargain. The specs are fantastic on paper – but it doesn’t pack quite as much punch as advertised. I have two large capacity (5200mAh) 6S batteries that I use to power my electric lawn mower. This power supply buckled after just 2.5 charges 😞 Here’s how it went…
END_OF_DOCUMENT_TOKEN_TO_BE_REPLACED

What better way to kick off 2018 than to look back 30 years. I somehow found this video on YouTube and the second I saw “Rad Max” turn around and take off his sunglasses, I knew I had seen it before. What a throwback!

I don’t remember if a friend had purchased it through RC Car Action magazine or if our local video rental store “Mr. Movies” had it. But I had definitely seen this one.

Check out the Kyosho Raider and Optima bashing it out at 14:35 (if you can make it that far 🙂). When you go to your hobby shop, make sure to tell ’em Rad Max sent ya.